If the body is a temple, then tattoos are its stained glass windows–a haunting quote by Vince Heminston, November, 2010.

Tattoos and warfare have been bedfellows for centuries, and with each war there is a warrior body of art. In Afghanistan, body art and troop tats are an accepted part of what it is to be a soldier.

Tattoos today are big business and a fashion statement made especially popular as top sports stars and famous names are displaying these creations for a variety of reasons. Modern tattoos are wonderful works of art executed by practitioners that have years of training under their belts but the most beautiful tattoos were those created on the bodies of soldiers, sailors and pilots during the Second World War.

Tattoos have always been popular among military personnel from time immemorial and are often dedicated to the memory of deceased friends and in remembrance of the units – frequently peppered with a variety of slogans, devotions or descriptions that reflect private experiences and parodies. These drawings on the body are often devoted to something deep and meaningful to the owner which he or she holds dear to his or her heart – similar to a silent prayer.

To any recurring visitor to U.S. military bases in Afghanistan or Iraq it seems as if the soldiers of war are getting more and more tattoos, and although the military still are in two minds about the soldiers getting these tattoos, they have little choice, although it is still not accepted for soldiers to sport neck tattoos.

Tattoos of war always carry a strong message. If you want a strong message of your own it is advisable to have your tattoo done by a professional whether you want yours to be tongue-in-cheek or serious, or simply in remembrance of someone or something special. 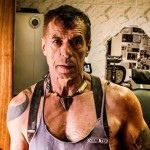 My name is Alain Reymond, and for those not in the know, I have been executing fine art in the form of tattoos for the past forty years with decades of experience under my hat.